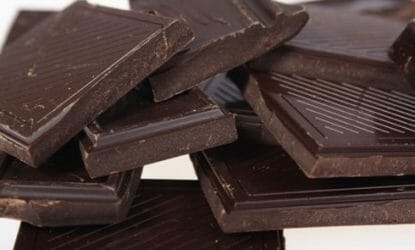 You may not need another reason to love chocolate, but we’re going to go ahead and give you one anyway: eating just one chocolate bar per week can reduce a man’s risk of having a stroke by about one-sixth!

Swedish researchers at Stockholm’s Karolinska Institute followed more than 37,000 men between the ages of 45 and 79 for about 10 years. They found that men who ate the most chocolate — about 2.2 ounces per week — had a 17% lower risk of having a stroke than those who ate little to no chocolate.

While this study specifically looked at the benefits for men, previous studies in both women and men have found similar results. Researchers pooled their data with that from previous studies, re-analyzed the combined data, and concluded that men and women who ate the most chocolate had a 19% lower risk of stroke compared to those who ate the least.

Though, not everyone is convinced, with some medical professionals pointing to a possibility that the link between chocolate consumption and strokes can be explained by health or lifestyle differences that went undetected – or perhaps, chocolate eaters are just healthier people. And in fact, the study participants who ate more chocolate tended as a group to be better educated and healthier than their peers. According to Health, they were less likely to smoke or have high blood pressure, and were less likely to have the heart-rate abnormality known as atrial fibrillation, a major risk factor for stroke.

Bottom line: Chocolate does have some healthy benefits. This is just one of many studies linking chocolate, or cocoa, to heart-healthy properties. Look for chocolate with at least 60 percent cocoa, and keep in mind that moderation is key!