Misting Showers Installed At Auschwitz Memorial Are Met With Controversy 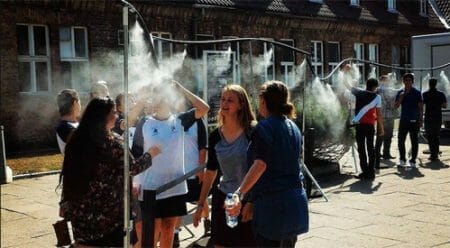 (PCM) The Auschwitz Memorial in Poland is being met with some controversy after the decision was made to install misting stations outside the memorials front entrance as a way to battle an extreme heat wave that has been affecting the area.

Auschwitz was once known as the largest Nazi concentration camp in Poland and now visitors are comparing the newly installed misting stations to the gas chamber “showers” that were used to kill the Jews during World War II.

In response to the controversy the museum addressed concerns via Facebook saying that due to the fact that guests waiting to visit the museum must stand in direct sunlight while waiting for entry cards and there is no shade there have been several incidents of fainting episodes and the museum felt that they needed to take action for the safely of museum visitors.

The museum also goes on to explain that they can not comment on any suggested historical references and say that this misting sprinklers in no way resemble showers or the fake showers installed by the Germans in some of the gas chambers, which were not actually used to deliver gas into the chambers. Instead Zyklon B was released into the gas chambers in a very different way. It was released through holes in the ceiling or airtight drops in the walls.

What do you think? Should the museum be concerned about guest sensitivity or are the misting stations a good idea?