Couple Gets Billed For Wedding No-Show! 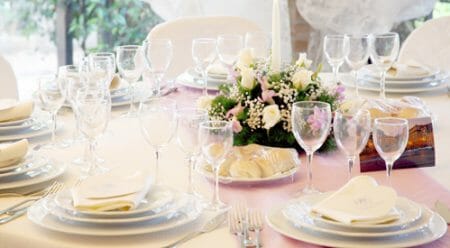 (PCM) There has been a huge debate that sparked online over whether or not a couple who no-showed to a recent wedding should be sent a bill for the price of their reception dinner plates.

What makes this even more controversial is the fact that those billed by the bride and groom for no-showing are family members. A cousin of the bride was shocked when she received a bill in the mail in the amount of $75.90 for two herb-crusted walleye plates, that also included service and tax charges.

The note that accompanied the bill read “This cost reflects the amount paid by the bride and groom for meals that were RSVPed for, reimbursement and explanation for no show, card, call or text would be appreciated.”

The cousin posted a picture of the bill on social media and it quickly went viral. The cousin said that she and her husband did plan to attend the wedding, however a last minute cancellation from the babysitter left them unable to attend, as the initial wedding invitation specifically stated that children were not welcome to attend.

The cousin does admit that she did fail to tell the bride about her change of plans or follow-up after the wedding, however she never expected to receive a bill in the mail for the no-show. There has been plenty of debate online with support for both sides of this issue, however we feel a simple phone call would have done the trick for either party.

Either way, what do you think? Should the cousin have to pay?

This entry was posted in Debatable, Family, Lifestyle, News