The Dangers Of E-Cigarette Use 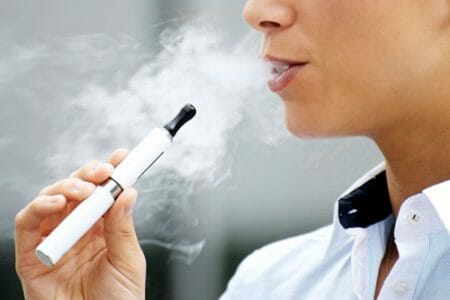 (PCM) Many people feel that the use of e-cigarettes are much safer than smoking actual tobacco cigarettes and “vaping” has soared in popularity in recent months. However, are e-cigarettes still considered a health risk?

The answer is yes. New research released by the New England Journal of Medicine claims that the vapor produced by e-cigarettes when turned up to their highest voltage levels, contain a very high concentration of formaldehyde, which is labeled a carcinogen.

While experts do claim that the health risks involved with smoking traditional tobacco cigarettes are much higher, they also feel that there are certain dangers to “vaping” on e-cigarettes that should not be ignored.

Many smokers begin using e-cigarettes as a smoking cessation tool, however some of the new research points to the fact that they formaldehyde levels found in the e-cigarette vapor were significantly higher than what is present in tobacco cigarettes.

Long-term exposure to this chemical substance can lead to lung cancer.  It is worth noting again that the levels of formaldehyde were only discovered when the e-cigarettes were turned up to their highest voltage, but that also seems to be the level that most users tend set their e-cigarettes on to get the maximum effect.

Either way, quitting smoking completely is truly a person’s best option to lead a full and healthy lifestyle.