Did You Know There Really Is No ‘Unknown Soldier’? 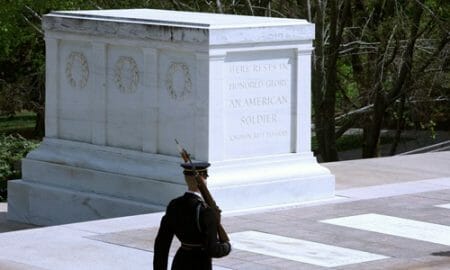 (PCM) As we continue to make strides in the areas of scientific and technological discoveries many mysteries of the bygone era are beginning to be solved.

For example, did you know that there is really no “Unknown Soldier” from the Vietnam War at the Tomb of the Unknowns in Arlington National Cemetery? Thanks to some major advancements in DNA testing the soldiers body that was interred there from 1974 to 1998 was eventually identified.

The soldiers name was Lt. Michael Blassie and he body was eventually removed and now the crypt lie empty, although it is still ceremoniously guarded each and every day.

Another example of DNA and forensics technology solving a cold case is the murder of prostitute Krystal Beslanowitch in 1995. A determined cop who was the original investigator into the murder that took place in Utah helped bring resolution to the case. As The Huffington Post reports, Sheriff Todd Bonner just couldn’t let the case go. Beslanowitch was 17 years old when she died from a crushing blow to the skull. Her body was found along the Provo River.

Leads at the time only led to dead-ends, but investigators finally got somewhere in 2013, when new forensic technologies, taking a full day, were used to extract touch DNA from the granite rock that crushed her skull. In fact, a tool called a forensic vacuum allowed for the DNA extraction. The DNA matched to a Joseph Michael Simpson, who had been a resort bus driver in the area at the time. Simpson was later arrested in Florida and charged with the murder.

DNA testing has also unlocked a mystery surrounding the Titantic and one of it’s passengers the night of it’s fateful collision with an iceberg. There was a two-year old young child on board named Loraine Allison and many were left wondering if she survived the crash that occurred more than 100 years ago, as she disappeared.

The story begins with Hudson and Bess taking their two kids, Trevor, seven months, and Loraine, two years of age, across the Atlantic on the Titanic. At the time of the sinking, it is said that Trevor was rushed to a lifeboat by their maid and that the other three died on the boat. However, only Hudson’s body was found, leaving the mystery of what happened to Loraine and her mother.

The unknown remained until 28 years later when Helen Kramer came forward on a radio show called “We the People”, and said that she was the two-year-old missing girl.  No one wanted to believe her and Kramer was left out of any family inheritance.

When Helen died in 1992 the claims seemed to have died with her. However, in 2012 the granddaughter of Helen, Debrina Woods, resurfaced the claims by saying she had inherited more evidence from her grandmother and that the truth should be told.

With the evidence stacked up, a group of Titanic researchers gathered up enough money to finally have DNA testing conducted to solve this mystery once and for all. The results from the tests showed that there was not a relationship between the two families, suggesting that this was a hoax or a complete misunderstanding.

DNA testing also disproved Anna Anderson’s claims that she was Anastasia, the youngest daughter of the Russian Tsar, Nicholas II. Similar to the Kramer story, researchers found multiple people from both sides of the family in question and had them take a DNA test. No DNA was shared, disproving a relationship.

These types of scientific advances are truly amazing and continue to help investigators solve a variety of cold cases that would have most likely stayed cold without this new kind of evidence.

This entry was posted in Fixed It For You, Life, Lifestyle, News, RIP, Science