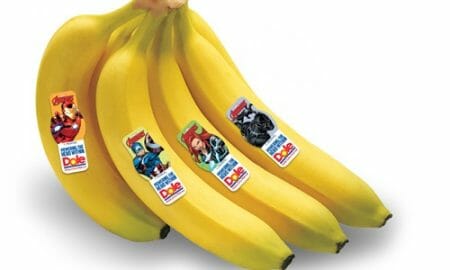 (PCM) Powerful news for families fighting the good fight of nutrition in the home: Super Hero help is here.

Black Panther, Captain America, Black Widow and other Avengers have teamed-up to help moms, dads and all citizens win more of their daily battles to adopt a healthier lifestyle including a diet rich in fresh fruits and vegetables. The program continues through May 11 in celebration of the epic release of Marvel’s Avengers: Infinity War on April 27.

“Powering the Hero Within” (#DoleHero) is an eight-week healthy-eating alliance between Dole and Marvel that combines original Marvel character-inspired recipes and healthy eating tips with character images on millions of DOLE® Bananas and Pineapples in U.S and Canadian supermarkets continentwide.

“Dole is taking its cue from the Marvel Universe to honor some of the biggest superheroes of all – the moms, dads, grandparents, teachers, coaches and others committed to making the home a healthier place,” said Bil Goldfield, director of corporate communications for Dole. “Since we know that getting kids to eat healthy can often seem like a hero-sized challenge, we’re arming those on the front lines with the reinforcements they need to change family eating habits one great-tasting healthy snack, entrée or dessert at a time.”

In addition to those iconic Marvel characters featured on DOLE produce, the program includes a dedicated Dole microsite offering recipes, character details and a celebration of the healthy-living collaboration between Dole and Marvel.

For recipes and other information about “Powering the Hero Within,” go to www.dole.com/Marvel. Use #DoleHero to follow on social media.