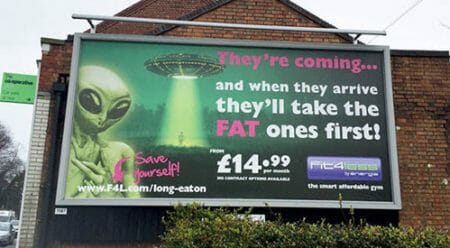 (PCM) A billboard for the gym, Fit4Less, in England is creating an uproar, as people are taking offense and the company is being accused of fat-shaming. The billboard in question features a fit-looking cartoon alien standing next to a UFO with the text “They’re coming … and when they arrive they’ll take the FAT ones first”.

Many people are having a hard time finding the humor in the ad and are outraged claiming that it is just another form of bullying and it made them feel very self-conscious. A representative of Fit4Less claims that the billboard in question was only meant to be harmless humor and claim that they don’t take themselves too seriously. They said “There is such a thing as being overweight and healthy, not everyone has to be skinny.”

Either way the billboard is certainly stirring up controversy, however the company has no plans to have the sign removed. Do you think the billboard is a form of fat-shaming/bullying or just harmless tongue-in-cheek humor?