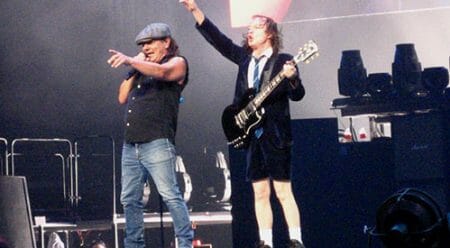 (PCM) Vibrations caused by rock music have been found to increase a drug’s therapeutic window by creating a Teflon-like coating over the micro particles used in drug delivery.

Researchers from the University of South Australia used AC/DC’s Thunderstruck to cause porous silicon micro particles to bounce in the air, which allowed for the entire structure to be coated with a plasma polymer overlay.

Senior research author Professor Nico Voelcker said completely coating a micro particle was difficult but essential in ensuring the optimal amount of a drug was delivered to the cancer cell.

“The micro particles are porous, basically they are like a sponge. You fill them up with a drug, but of course you want to prevent the drug from escaping, and that is why we create the coating,” he said

“That is where we came up with the idea of using a loud speaker that we would play into the system. We would turn that loudspeaker to a song that it would vibrate and the particles would bounce up and down. The chaotic frequencies worked well and gave you a more homogenous coating.”

Researchers filled the micro particles with a chemotherapy drug called camptothecin and found that when it was coated using the rock vibrations there was a markedly slower release of the cytotoxic drug. This effect correlated positively with the plasma polymer coating times, ranging from two-fold up to more than 100-fold, revealing a significant time delay in cell death onset.

Professor Voelcker said although the technique had so far only been used on anti-cancer drugs were, it could potentially be used for other treatments.

“This is something that has not been done before, particularly not with plasma coatings,” he said. “We only tried this with a chemotherapy drug that we use for the treatment of cancer because you can visualise it so easily. We might end up using different types of drugs; we might use drugs that are anti-inflammatory or antibiotic. It was just one model application for us.”

“We have done some work with cells and now we will move on to the next stage of research.” Professor Voelcker said the use of the Australian rock band’s song Thunderstruck was intentional because he felt it was a perfect fit for the study because of its upbeat tempo and title. “Plasma is the fourth stage of matter, it is an ionised gas,” Prof Voelcker said.

“We used a cold plasma, but an example of a hot plasma would be the rays of thunder. We ended up using Thunderstruck because we liked how it linked thunder and plasma gas.” The proof of concept paper was co-authored by Dr Steven McInnes and Thomas Michl from the University of South Australia’s Future Industries Institute.