Former Musician Is Journeying Across America With A Goat! 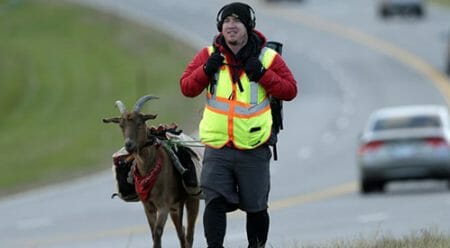 (PCM) Former musician Steve Wescott claims that he is being compelled by God to journey across America on foot and his traveling companion is none other than a goat! Westcott says that he was in a band in 2010 and despite not wanting to leave, his band mates requested his departure. It was shortly after this incident that Wescott made the decision to set out on his over 3,800 mile journey.

Wescott began at the Space Needle in Seattle, Washington and plans to end his journey in Times Square in New York, NY. He had initially planned to have a dog accompany his on the trek, however the dog he had originally chosen fell ill and was unable to make the trip. Westcott learned that goats make great road companions and are fantastic pack animals, so he adopted one named Leeroy Brown from the New Moon Goat Rescue in Arlington, Washington to join him on the trek.

The unlikely pair began their cross country journey on May 2, 2012 which marked the 20 year anniversary of Wescott’s fathers death. Thus far Wescott and Leeroy Brown the goat have traveled through Washington, Oregon, Idaho, Utah, Colorado, Kansas and Missouri, as they slowly make their way across the U.S. The pair have recently been spotted in Indiana.

Wescott partnered with a charity to raise awareness and money to fund an orphanage in Nairobi, Kenya giving further purpose to his spiritual trek across the U.S.A.