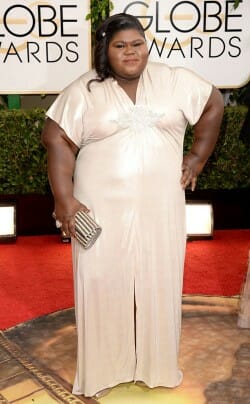 (PCM) American Horror Story: Coven and Precious actress Gabourey Sidibe may not have been nominated for a Golden Globe this year, however she obtained a major win against those criticizing her weight via Twitter with an epic comeback Tweet.

The cruel haters took to the net after Sidibe arrived at the Golden Globe Awards posting up several tweets that criticized everything for Sidibe’s shimmering floor length gown to the choices made by her stylist.

Here are just a few of the nasty tweets posted:

“Who thought this was okay?” including the hashtags “ImSurprisedSheCouldFitInTheFrame” and “#IThinkSheAteTheGoldenGlobes.”

Women today already struggle enough with body image, it is just awful that people feel the need to post such hateful commentary. The Golden Globe Awards is about honoring talent and craft in the field of acting, not sure when it became a beauty competition.

It all good though, because Sidibe came back at critics with one of the best zingers and definitely secured a major win against the haters when she tweeted:

To people making mean comments about my GG pics, I mos def cried about it on that private jet on my way to my dream job last night. #JK