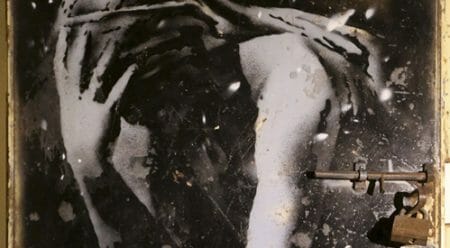 (PCM) Members of the art world know that getting your hands on a piece of art painted by illusive street artist Banksy could end up costing thousands of dollars and many feel that his works are absolutely priceless. So, you can imagine the dismay of one man in Gaza, who feels that the was tricked into selling the door to his war-ravaged home on which Banksy painted a mural for only about $175.

The painting on the door featured the Greek goddess Niobe and was titled “Bomb Damage”. Banksy had painted the mural on the metal door of the man’s home, which was the only part of the home that was still standing after it was hit during last year’s Gaza war. The door painting was one of four in the area painted by Banksy when he visited the Gaza area earlier this year.

The home owner, Rabie Dordoura, claims that he was approached by a local artist Belal Khaled who tricked him into selling the door for a fraction of what it could have fetched. Dordoura claims that at the time he was completely unaware of Banksy and had no idea just how much the door could be worth. Some Banksy art sells for hundreds of thousands of dollars.

He now wants the door back after learning of its’ value, however Khaled is claiming that he purchased the painting fair and square and has no plans to return it to Dordoura.  Dordoura claims that he often would see some people stop to photograph the door after it was painted, however he never truly paid it much attention. He was under the assumption that when he was selling the door to Khaled it was for the metal in the door itself, not the painting.

Dardura now wants the door to be in place as he begins to rebuild his home. Khaled claims that he did not trick Dardura and his only intention was to protect the painting not make any type of profit. He has no plans to sell the painting, but is in talks to have it displayed at a few international art galleries to depict the suffering of Gaza and the atrocities of war.

The door mural is currently being held at a secure location by Khaled, however for obvious reason he chooses not to reveal the exact location.  What do you think?  Was Dardura tricked or did Khaled purchase the Banksy fair and square?

Police in Gaza have now seized the door featuring the Banksy painting from Khaled. The painting will remain under police protection until a hearing is scheduled to take place to settle the dispute. Dardura still feels very upset and depressed over the situation and hopes that the outcome will be in his family’s favor.  All they are asking is that the door be returned, as this is a clear case of fraud.  A court hearing has not yet been scheduled.