My Journey To Health, The Habits of Hobbits 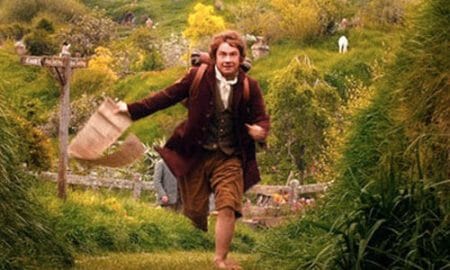 The first question to answer is “What do the habits of hobbits have to do with getting to good health?”  The answer is simple.  Everything!

Those of you who read this column regularly know that I find great inspiration from fiction.  And there is much that can learned from hobbits if we consider a few facts, expand on them and use a bit of imagination.

What do we know about hobbits off the tops of our heads.  Well, they are a small people.  They enjoy six meals a day and they have very tough and hairy feet which allows them to go shoe-less.  We know they bake as bread is mentioned in The Hobbit and The Lord of The Rings.  Seed cake is also mentioned in The Hobbit as Bilbo’s home is invaded by dwarves and Bilbo wonders about the provisions in his larder.  We know they drink both wine and beer.   We know that they enjoy bacon eggs, apples, strawberries and cream and other simple food.  We know that Bilbo liked to walk.  He even had maps of the shire where he had marked his favorite places to stroll.  Bilbo even wrote a walking song.

So what can be inferred from the above facts.  The Hobbit society was agricultural in nature.  We know they kept chickens, pigs and cattle.  We know they grew apples and strawberries raspberries, lettuce, grapes and coffee beans at the very least.  We also know they grew tobacco but it seemed they used it responsibly.  They must have grown grain as there was bread and cake and you need hops to brew beer.

What can be pulled from these facts that can help with our health.  Let’s start with six meals a day.  Eating six times a day is a healthy habit to get into.  These meals should not be meals that are indulgent in fact I would bet indulgent meals of any kind were not a daily experience in The Shire.  The six meals were mostly rustic healthy whole foods.  Breakfast may have been Bacon and eggs, but second breakfast was more like a snack and may have been whole grain bread and butter and maybe some tea.  Eleveses may have been some cheese and fruit,as the hobbits by that time were more than likely in the fields working by then and would be carrying their food with them.

Lunch could have consisted of a sit-down meal or again something carried into the fields or pastures.  Whole grain breads maybe a little meat or a small meat pie.  We know Tolkien loved rural England and lunch was often pies in rural England one savory and one sweet.  So meat and vegetables in one and fruit in the other.

Tea would be taken at home in the latter part of the afternoon.  We know that hobbits liked 6 meals a day but Tolkien stipulated that with “when they could get them.”  Tea may have been tea, bread and butter, small cakes and maybe small sandwiches.  The richer the hobbit family the grander the tea.  Supper we know was a hearty meal that the whole household sat down together to eat.  We find this to be true when Frodo Sam Merry and Pippin all sit down at Farmer Maggot’s table.  We even know the menu, or at least some of it.  There was beer, bacon, mushrooms and other solid farm fair.  There must have been a bit of meat as the dogs “layed by the fire and gnawed rinds (cheese) and cracked bones.

I don’t think that meat played a large part in a hobbit diet.  First hobbits were small and bringing down a cow for beef would have taken a lot of work and many hobbits to do it.  Mutton and lamb?  Possibly but again these animals would be used for other purposes.  The hobbits would need wool for clothing and so killing the animals for food would take a way a continued source of making fabric so my guess is there was a small amount of meat per meal and none at all at some.  Maybe a four ounce portion an many dietitians suggest.

We know that there were vegetables and potatoes and turnips cabbages and carrots too.  We are also aware id the hobbits deep love for mushrooms and the films suggest tomatoes.  Bread was a staple food, as it is in almost all cultures, but not white bread.  These would have been whole grain rustic loaves, loaded with flavor and nutrition.  Apples, for sure, as well as strawberries a hobbits diet was bright and colorful.  Not completely vegetarian but much more so than what we consume with the large amounts of meat we make a habit of eating.

The hobbits exercised because in an agricultural society the exercise was built in to the day.  Planting, weeding and harvesting was all physical work as was milling grain into flour.  Tending sheep and cattle was also physical as the animals would be moved from place to place in order to graze.  Shepherds and herders had much to do.  And there is no doubt that all of the hobbit food was organic, could you imagine Sam using a pesticide?

We know that Bilbo liked to walk.  We also know that ponies were available but not many road and so a hobbits feet were the main source of transportation.  Also feeding ponies takes a lot and what animals hobbits had were probably used more for work that for puling a carriage.

So a hobbit life style was a healthy lifestyle.  A lifestyle that consisted of hard work whole foods and regular exercise.  This type of lifestyle is something we all should aspire to and actually adapt to the best of our ability.

As you know my goal right now is to become vegan.  To eliminate animal products all together and I am working toward that, but in the meantime, living like a hobbit seems a great beginning.  Now if only I could get Mrs. Maggot to invite me to dinner.