LED Eyelashes Are The Next Make-up Trend! 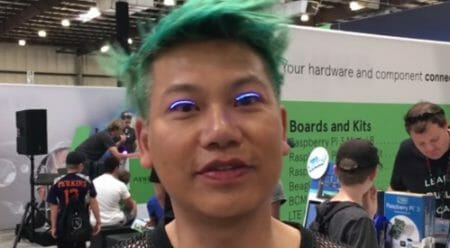 (PCM) So, apparently LED eyelashes are now a thing and are making waves as one of the next big make-up trends. Just when we thought it couldn’t get any better than yellow blush and feather eyebrows!

According to Mashable, the light-up eyelashes are called F.Lashes and they are even interactive! The eyelashes will change their display animations depending on the way in which the wearer moves their eyes or tilts their body. It definitely brings new definitely to one’s eyes lighting up a room, as this product literally does just that!

The LED eyelashes will come in pink, red, blue, light blue, white, yellow, green, and can be applied using normal eyelash glue. They are powered by a tiny watch battery and remained fully powered for approximately four hours. You can control the F.Lashes using a small controller that attaches to the back of your head using hair clips.

The creator of the F.Lashes Tien Pham explains just how the LED eyelashes work in the video below and they can be set to either “dance mode” or “sparkle mode”. Pham also insists that the lashes are in now way blinding and can hardly be noticed by the person who is wearing them. He says you might see some light, but only in a dark room.

Now we have really seen it all!