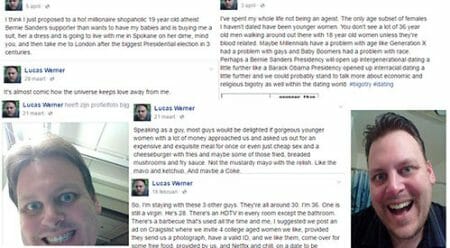 (PCM) A 37-year old man by the name of Lucas Werner has been banned from the Starbucks location in Spokane, Washington after being accused of hitting on 16-year old female employee and generally just being a creep.  Werner has posted a defense on social media claims that he is the victim of ageism or otherwise discriminated against due to his age.

Werner’s defense claims that he was unfairly banned from the establishment after he innocently requested that the 16-year old female barista accompany him for dinner sometime. He claims that the note he wrote and passed to the young woman was not at all sexual in nature and was completely and utterly harmless.

Starbucks and the barista felt differently and Werner’s actions were reported to the local authorities. Angered by the situation Werner posted the following message on his Facebook page and urged his supporters to call the Starbucks location and complain on his behalf.

For those who would like to call them to complain about age difference discrimination on my behalf. In brief, a barista said I was funny and that she liked me, so I politely thanked her, sat down to drink my hot chocolate, wrote her a nice note, so as not to interrupt her work schedule asking her out to dinner if she was interested and walked out, happily thanking the friendly staff and wishing them a Merry Christmas.
When I returned yesterday, a Spokane Police Officer said the note was creepy, which it wasn’t, and asked me to not return because I was being banned. We already know this is because the barista was young and legal aged and I’m 37.
I did not ask her to have sex with me. I asked if she would like to have dinner sometime. Perfectly normal adult behavior. I figure, if she was 16 and flirtatious it would still be legal to ask her to dinner. You can’t even work at Starbucks unless you’re 16, which is the legal age to date people. This is a clear case of age discrimination. Feel free to call them to complain on my behalf.

It seems, however that Werner’s plan backfired and rather than people rallying to support him they instead wrote tons of positive reviews for the Starbucks location. They praised the management of the store for taking swift action and protecting their young female employee.  Upon further investigation it has been revealed that Werner actually lives in a homeless shelter and this is not the first time he has been accused of behaving inappropriately with a female minor.

Werner runs a website called Conversation Our Age which basically just consists of posting complaining about why younger women won’t date him and all the reasons that he feels they should. It’s really very pathetic.  One post in particular reads:

I haven’t had a girlfriend in 5 years. I’ve never dated a younger woman in my life. I’ve been trying to date younger women for 5 years. I’m an atheist. I’ve given away over $3000 worth of food on the street in 5 years. I moved 400 miles from Olympia to Spokane because I couldn’t find anyone on 4 dating sites. I need to date a Millennial. I’m 37 years old. Generation X marks the spot. I’ve dated women my age to 18 years older. All my exes, mom and step-mom prefer older men to two 30 year marriages between my 4 parents. I’ve lost 170 lbs. I’m looking for a woman under 26 years old in Spokane to go out to dinner with me to Red Robin tonight. Any takers?

Starbucks claims they have no plans to allow Werner to return to their establishment and we certainly praise them for weeding out a definite creeper!

This entry was posted in Debatable, Food & Recipes, Lifestyle, News