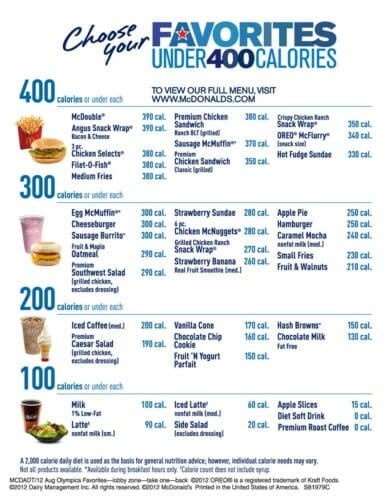 Trying to eat healthy on the road? Unfortunately, even the lowest calorie items at fast-food chains aren’t exactly healthy, but sometimes you don’t have time to cook at home and a drive-thru is your only option. If you’re sick of pulling out your smartphone to try and find the lowest calorie options at fast-food restaurants (because let’s face it, they don’t all want to list the calorie-counts), you’re in luck! At least at McDonald’s.

McDonald’s has introduced its new “Favorites Under 400 Calories” menu. The new menu feature will be available both in stores and at the drive-thru, taking all the guesswork out of finding the healthiest fare. They break it down into categories of 400, 300, 200 and 100 calories or less. Sure, a 340-calories snack-sized Oreo McFlurry isn’t exactly healthy, but it helps to know (and convince you to avoid the regular size).

“Favorites Under 400 Calories is one more way we’re making nutrition information accessible. Like our mobile app, this platform aims to empower our customers and employees to make choices that are right for their nutrition needs,” said Neil Golden, Chief Marketing Officer, McDonald’s USA. “We’ve found that customers are surprised to learn about the calorie content of some of their favorite menu options at McDonald’s. In fact, customers may be surprised to know that about 80 percent of national menu choices are under 400 calories for the standard recipe.”

The “Favorites Under 400 Calories” can certainly be helpful for some, just don’t be fooled into thinking everything on this menu is “healthy.”