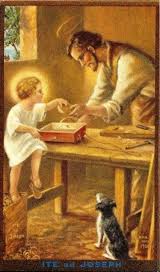 Yesterday we left off with the idea of what Mary would tell Joseph about her miraculous pregnancy. I think we should know a bit about Joseph first.

Joseph was quite probably a middle aged man, possibly friends with Mary’s father. He was a carpenter. This means he was an artisan and a tradesman. His life was about hard work. He would have to not only cut and shape wood into what his customers were looking for. He would also have to go and cut down the trees or purchase the wood from other types of suppliers.

Wood was something was used for a lot of different purposes. Bowls, dishes and utensils would have been made of wood, as well as carts and plows. Joseph was probably on no way a rich man but he would be able to supply for his family.

We really do not know much more about Joseph. The Gospels tell us very little. In fact Joseph does not say anything in scripture we do know he listened and he acted on what he heard. We also know he was a man of deep faith, we know this by his actions.

The record of what Mary said to Joseph when she told him her incredible news does not exist. It must have been one of the worst conversations ever had between a man and a woman. Mary may not have told Joseph at all. It was really the custom of the time that the Father would speak for the daughter. However Joseph got this new we can assume one thing. It broke his heart.

Joseph had two choices as far as Jewish law was concerned. He could expose Mary publicly. If he did according to the law, Mary would be stoned to death. I read a description of this stoning. The people of the town would take the woman to the highest peak, throw her off of it and then stone her from above. This was a serious crime. The second choice was to break the engagement quietly, which would actually be a divorce in those days, and send Mary as far away as possible. After deliberating this was the course Joseph chose. And then Joseph fell into a troubled sleep.

Joseph dreamed. Much like his great ancestor Joseph son of Israel, Joseph dreamed a dream from God. In this dream God told Joseph, “Do not be afraid to take Mary as your wife, what has been conceived in her happened thru the power of the Holy Spirit and you will call the child Jesus and he will save his people from their sins.” From this point forward we know one last thing about Joseph. He believed and he did what God told him to do. But little did he know what that would entail.