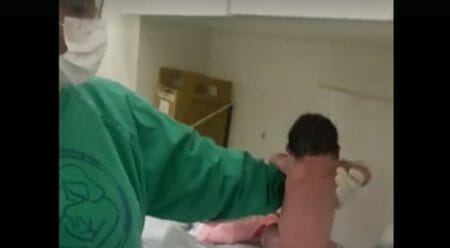 (PCM) When we think back to the first moments of our lives, many of us cannot recall what it was like as we were being born, however it is safe to assume that for the majority of us it including a whole lot of screaming and crying. Walking was definitely something that was out of the question for a least the first year, but don’t tell that to the baby who was recently born in Brazil who appears to trying and walk only mere moments after being born.

She was seriously ready to go!

A clip of the newborn baby attempting to walk was shared on Facebook by a woman named Arlete Arantes and has already surpassed over 87 million views and counting.

In the video a woman dressed in scrubs can be heard saying “Oh, my gosh! The girl is walking. Good Gracious!” and you can also hear the midwife saying off camera that she was trying to give the new baby a bath, but she certainly had other ideas.

It is truly amazing to see this newborn baby attempting to take rather large steps only moments after being born. There has yet to be any confirmation on exactly which hospital that the baby was born in, but reports state that the uniform design on the scrubs matches that of Rio Grande do Sul in South Brazil.

Looks like they definitely have a little Wonder Woman on their hands and the timing could not be more ideal, as this upcoming Warner Bros. film opens up this coming weekend! Oh, the irony!

This entry was posted in Baby, Debatable, Life, News, Parenting