News Flash: Timmy Was Actually Rescued From The Well 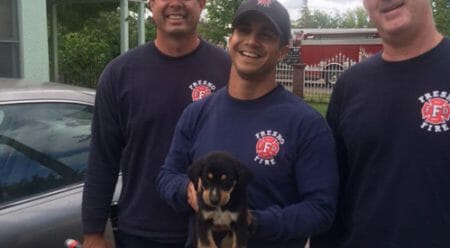 (PCM) Where is Lassie when we need her? No worries, firefighters in Fresno, California did just fine without our favorite hero canine when they were able to rescue a six-week old puppy named “Timmy” who fell 50 feet down an eight inch pipe in the ground and became stuck in an old well.

The ingenious firefighters used a piece of rope to make a harness and were able to loop it around the small German Shepard puppy and hoist him up to safety. One firefighter even jokingly called little Timmy a “troublemaker”.

The firefighters snapped a few pictures with Timmy the puppy and then turned him over to his owner, a 12-year old girl named Teresa.  The opening to the well has now been covered with a piece of cardboard and brick to prevent any additional accidents from occurring.

Little Timmy seems to have fallen into the well sometime overnight and authorities were notified by Theresa’s aunt who found the puppy while Theresa was at school.  The puppy only appears to have sore hind legs after the incident, but for the most part is unscathed.

The manager for the property has since properly sealed the well opening.