Nivea Creates A Seagull Drone That Poops Out Sunscreen … Seriously! 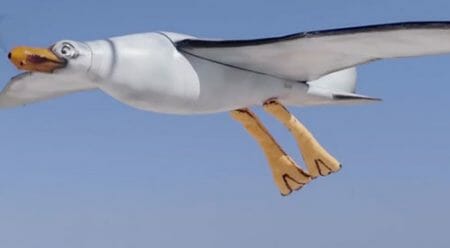 (PCM) Skincare manufacturer Nivea recently created quite a character for their commercial about the importance of putting sunscreen on young children when spending the day on the beach. The only problem is that the commercial was meant to be taken seriously and it ended up bring more laughs that anything else during the recent Cannes Lions Festival where it was competing.

Nivea came up with the idea to build a rather large remote-controlled drone in the shape of a seagull which literally poops out globs of sunscreen on unsuspecting children as they are frolicking along on the beach. Yes, it looks as ridiculous as it sounds!

The company felt the sunscreen pooping seagull drone was the perfect answer to the on-going issue of parents attempting to put sunscreen on squirming children who refuse to sit still at the beach. It’s actually kind of creepy and the fact that the drone is being controlled by two creeper Nivea representatives who are watching your children while hiding in a sand dune does not make this whole scenario play out any better at all.

We could only imagine seeing this thing swooping around during a day at the beach! Too weird!