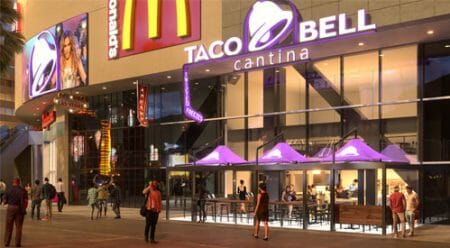 (PCM) Fast food retailer Taco Bell has announced plans to open a high-end restaurant location on the Las Vegas strip. The restaurant will feature the same Taco Bell menu favorites that you know and love, but will have the addition of several other higher end items such as tapas and of course booze.

The restaurant will be called Taco Bell Cantina and will feature two stories and be open 24 hours a day for all your taco needs, especially after a long night in Vegas. This is genius! The decor inside the eatery will be Vegas themed and they will be offering beer and frozen drinks called “twisted freezes” which will feature vodka, rum or tequila with fruit juice.

The location will also feature some absolutely fantastic views of the Las Vegas Strip!

There is another Taco Bell Cantina location in Chicago and the chain reveals that they have plans to open this style of restaurant in additional cities over the next few years. Rest assured that what happens in Vegas, at least when it comes to Taco Bell, doesn’t necessary have to stay in Vegas.