Nordstrom Is Selling ‘Dirty’ Jeans For A Hefty Price 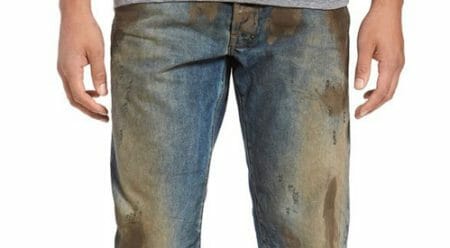 (PCM) Most of us could probably head outside to the backyard, especially after a rainstorm and create our very own version of these muddied-up so-called “dirty” jeans that Nordstrom is selling for the heft price tag of $425!

It seems the jeans have been for sale on Nordstrom’s website for quite some time, but only now has the internet gotten a look at them and the snarkiness has taken over! Many even thought the jeans had to be some type of joke. But these jeans are no joke. In fact, they are also sold at both Neiman Marcus and Saks Fifth Ave as well!

According to the Nordstrom website, the jeans “embody rugged, Americana workwear that’s seen some hard-working action with a crackled, caked-on muddy coating that shows you’re not afraid to get down and dirty.” Seriously! That is the description!

According to CNN Money, the jeans are made by the fashion company PRPS, which also offers a “mud denim jacket” for deep-pocketed fashionistas who want to rock the all-denim, all-dirt look. The company also makes paint-splattered, pre-ripped dungarees, including one pair it calls simply, “Destroyed.”

The care instructions claim that the jeans can be washed and rest assured they will not lose their caked-on dirt appeal, why because it is fake mud!  Once again, fake mud on jeans on purpose! What is the world is wrong with people these days! Just bring some jeans over to our place and we can have a big ol’ mud fight and heck, we might even cut you a deal and sell you some muddy jeans for only $100!