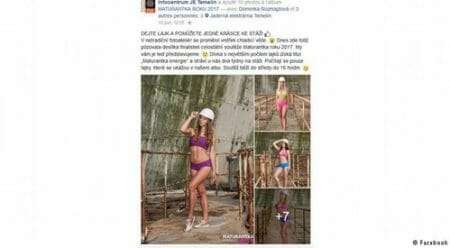 (PCM) We have definitely never heard of a hiring process quite like this one! A company in Czechoslovakia is requesting that female applicants interested in an intern position with the company post image of themselves dressed in only a bikini on Facebook to compete in a contests. The girl who receives the most “likes” would then win a two-month internship with the company.

While the contest is garnering the company a lot of attention online, most of it is not positive. Many feel the contest is degrading to women and it is just utterly ridiculous in the first place. According to the Facebook page for CEZ, ten young women, all of whom happen to be recent high school graduates made the final round of the contest. Looks like we may never know the winner because the Facebook post has now been removed, most likely due to all the backlash.

CEZ released a statement saying, “We did not want anyone to feel upset. he purpose of the competition was to introduce a non-traditional environment and support technical education. However, if the original vision raised doubts or concerns, we are very sorry about it.”

We are glad that someone finally came to their senses and pulled this incredibly sexist contest!