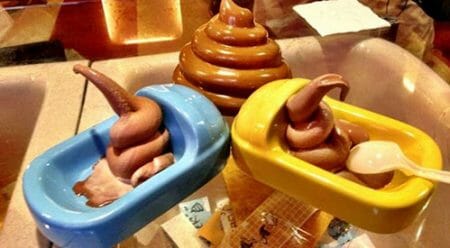 (PCM) Toronto, Canada has been well known for it’s fine dining establishments and world-renowned culinary experiences and they are now gearing up to add yet another unique dining experience to their ever expanding collection. The Poop Cafe Dessert Bar is set to open in mid-August in the city’s Koreatown area that will feature a wide variety of dessert items that all resemble some form of feces.

Owner, Lien Nguyen, when speaking with the Toronto Star, claims that she is trying to “make poop cute” and goes on to say that she garnered the inspiration for the Poop Cafe while visiting her mother in Taiwan, where they visited a toilet-themed restaurant.  Nguyen finds it hilarious to pair poop and food items together and after visiting the establishment in Taiwan could not get the idea out of her head, so she then made the decision that after finishing school she would bring the idea to her home in Toronto.

The Poop Cafe menu will feature traditional Thai, Japanese and Korean desserts like patbingsoo (red beans with ice), as well as chocolate ice cream.  The names for the various desserts are still being decided upon. Much like the toilet-themed restaurant in Taiwan, customers will sit on fake toilet seats and consume their treats out of urinal or toilet bowl shaped dishes.

Other toilet-themed restaurants have already opened in Russia, South Korea, the Philippines, China, Japan and Indonesia, but the Poop Cafe Dessert bar will be the first of it’s kind in North America.

Would you visit or does the idea of poop-themed desserts gross you out?