(PCM) Parents are in an uproar after a popular restaurant in Rome called, La Fraschetta del Pesce, placed signs in their windows banning children under five years old from entering their establishment. One customer wrote on TripAdvisor that he was left “speechless” after he and his two year old son were turned away from the restaurant while vacationing in the city. The sign on the restaurants door features large “No” symbols over images of a crying baby, a stroller, and a car seat! 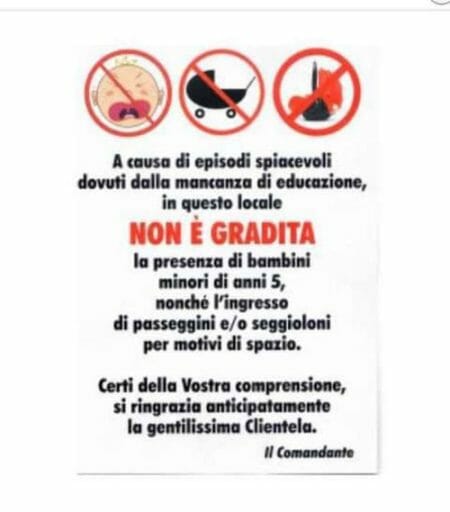 A translation of the text on the sign reads “Due to some unpleasant incidents caused by a lack of manners, children under 5 are not allowed in this restaurant.” Despite the controversy the restaurant owner stands behind his decision to ban children under five saying that they create an atmosphere of chaos in the restaurant from running around the tables to shouting and crying and throwing things around. He also claims they hate fish and this is a seafood establishment, so it should be a no brainer for parents.

Many feel that the restaurants new policy violates several Roman laws set up for accessing public areas and businesses, however others feel that is the restaurants right to do as they see fit with their business. It is unclear who will win out at the moment, but if you are looking for a calm and quiet dining experience while in Rome, now might be the perfect time for you to pay La Fraschetta del Pesce a visit.