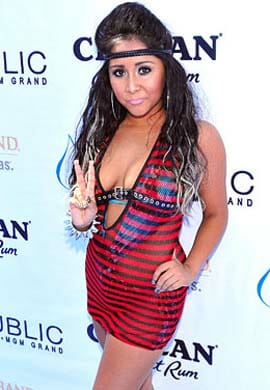 Snooki’s weight loss is obvious on this season’s Jersey Shore. So how did she drop the weight? Not with a fad diet or meal delivery system, but with good old fashioned healthy eating, exercise, and vodka! She shared how she lost the weight on The Tonight Show with Jay Leno:

“Pretty much motivation — going to the gym and watching what you drink, obviously, alcohol. It sucks, but no Long Islands or margaritas when you drink. It has to be straight vodka,” she said.

That’s right, the party girl didn’t have to give up her ways. She was still going out and drinking at night, just no more sugary cocktails and jumbo sized margaritas like she used to get on the boardwalk.

And despite her worries of gaining weight when the Jersey Shore gang went to Italy to film the current season, Snooki says she didn’t gain a pound – in fact, none of the fist pumping tourists did! Snooki told Jay Leno, “Honestly, eating the pastas there was kind of like eating salad here in America. It was, like, so fresh and healthy. … None of us gained a pound.”

Hmm, I don’t know about that!

Nonetheless, Snooki says she’s not done losing weight just yet, and she’s kicking it up a notch. In a recent interview with Us Magazine, she said she wants to get down below a size 4 – the size she was as a cheerleader in high school. The reality star has also been hitting the gym hard these days instead of the bar, and is incorporating strength training sessions into her workouts.

“As everyone’s planning their night at the club, I’m wondering when Gold’s Gym closes,” she tweeted!