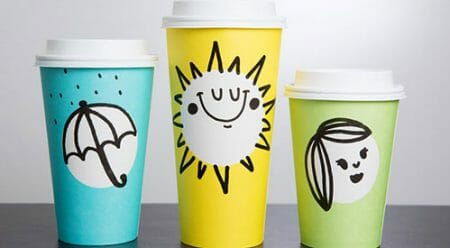 (PCM) We could all use a little “spring” in our step after coming out of such a cold and dreary winter, so people were overjoyed with the new pastel-colored cups that Starbucks has unveiled to usher us coffee-lovers into the spring season. The new bright and cheery cups with be available for hot drink orders at all Starbucks locations in the U.S. and Canada beginning on March 16.

The pastel spring cups will only be available for a limited time and the colors available are blue, green and yellow. They also feature large white dots in the center, where adorable designs such as an umbrella, a sun or anytime of symbol can be hand-drawn in by the barista. (Let’s hope they are artistic!)

According to a press release from Starbucks, “After the gray days of winter, there’s nothing quite like those first few bursts of color that indicate the arrival of springtime. Starbucks first began offering seasonal cups more than 20 years ago with its first holiday cup and has since introduced cups celebrating autumn and summer.” This year will mark the first time that the company has introduced a new cup design for the springtime season.

Starbucks is also releasing two new iced and hot macchiato drinks: the Coconutmilk Mocha Macchiato and the Cinnamon Almondmilk Macchiato. Now we have even more reason to hit our local Starbucks this spring! Delicious new drinks and new cups!  It’s a win/win!