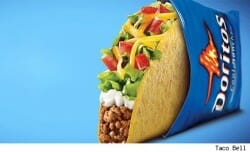 The nacho-cheese flavored Doritos Locos taco product, which was launched in March 2012, has been the company’s most successful launch to date. Taco Bell sold over 100 million tacos in just a few weeks. The company teased about the release of the Cool Ranch flavor for quite some time, and only today have they confirmed the exact date to be March 7th. That date just so happens to be exactly one year after the launch of the nacho-cheese flavored Doritos Locos tacos at stores world-wide.

The new taco flavor is being heavily promoted on Taco Bell’s official website and on Facebook, and they also made an announcement on Twitter with the hashtag #CoolRanchDLT!

Be sure to grab one in early March and definitely let us know what you think!