Texas Cheerleaders Use Chilling 9/11 Audio Recordings For Their Routine 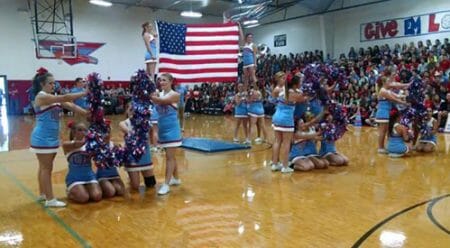 (PCM) A clip of a cheerleading squad from Lumberton, Texas using chilling audio recordings from 9/11 dubbed over top of Lee Greenwood’s “God Bless The U.S.A.” is going viral and stirring up quite a bit of controversy online.

The clip was uploaded to Facebook on the 14th anniversary of the 9/11 terrorist attack and has already surpassed well over 20 million views and continues to climb, however people are having very mixed opinion as to whether or not the routine is in good taste.  Some are saying the routine is incredibly touching and leaves them with a sense of patriotic pride, while others are saying that is absolutely disgusting and incredibly disrespectful to those that lost their lives on that fateful and tragic day.

Sources say that the cheerleading squad has been performing this very same routine since 2002 as a way to show their respect and honor the victims of the 9/11 terrorist attack, however this the very first year that any type of video of the routine has surfaced online.

You can view a YouTube clip of the routine below:

What do you think? Is the routine a touching tribute or done in poor taste?