Today I met Richard, Somebody to Talk To. 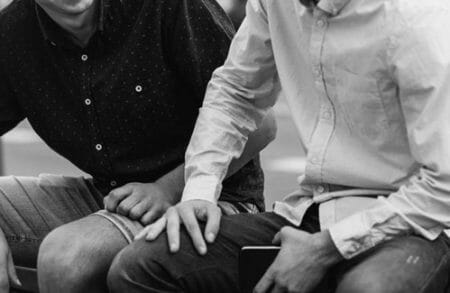 (Three years ago) Today I met Richard. He approached me while I was walking in the city and I assumed he was looking for money so I handed him all the loose change I had in my jacket. I was in “the zone”. Zigzagging through the busy sidewalk after working out and on my way to the subway.

He looked at me a little hurt and said “I really don’t want anything from you, I just need a little bit of your time. I know it sounds strange, but I just need somebody to talk to and there was something about you that my gut told me you might be somebody I could talk to.”

Having lived in the city for 31 years and dealt with my share of panhandlers, violence, addiction and more, I tend to be a bit of a cynic when people approach me that I don’t know on the street. My guard was up, but I was willing to listen even if I might be “getting played”.

Richard was either a very good actor or he was genuinely in a lot of pain. He mentioned that his mother recently died which was due to years of addiction. He admitted he struggled with the same on and off. I told him I’d been there and that I’m in recovery myself from alcoholism.

The more I talked with Richard the more I realized he was very sad and just needed someone to talk to. I’ve watched people many times over the years simply turn their heads when people walk up to them, expecting to be asked for money or their time. Neither of which most people want to give.

We walked a block over to a set of stairs and sat in front of a church and spoke for nearly an hour. Richard was educated, mentally ill, and on and off homeless. He was well-dressed, very intelligent and a very warm person. He was also incredibly lost and beside himself after his mother’s recent death. “I’m all alone now”. I assured him that he really wasn’t. None of us really are.

“Both my brothers, my father and now my mother are dead. My sister is somewhere on the streets homeless, and schizophrenic. I don’t have a lot of friends anymore and I simply just needed to connect with another human being and you seemed kind”.

I have to admit this hit me pretty hard. He didn’t want anything, as a matter of fact he gave me the dollar in lose change I’d given him, back to me. I would say Richard was a very genuine human being who has struggled much of his life and was very lonely and probably somewhat suicidal, which is something we talked a little bit about.

When I was at my darkest close to two years ago after my separation and ensuing divorce I thought a lot about how people simply give in when they’re in such a deep place of depression and sadness. I luckily had people to talk to and an inner-drive to grow and move forward. Richard and I spoke a little bit about that as well.

In the end he seemed lighter, as did I. I realized that I needed to talk to somebody just as much as he did. I’ve been so stressed lately trying to find an apartment as well as some extra work. I also have a tendency of isolating myself.

What’s the message here? Slow down? Listen? Be more compassionate? Give unconditionally? Maybe a little bit each. Regardless, I’m grateful Richard approached me.

Michael Munson is owner of Thrive Fitness & Wellness, one of the longest
established personal fitness trainers and wellness experts in Philadelphia.
He has been helping clients lose weight and stay fit for over 20 years.

This entry was posted in Advice, Family, Relationships