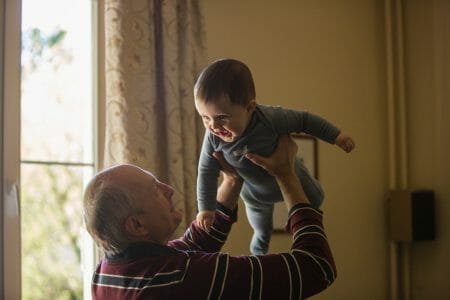 It’s a blessing when families grow. Generations are built, traditions are started, and lineages continue on. It brings more birthdays and family photos need to be captured zoomed out. While changes are occurring, it can sometimes be confusing to keep track of the family tree and how everyone is connected.

Below is a quick-hit list of what the correct terminology is for each member of your extended family all of the way up the great-grandparents’ chain to down to the newest additions.

First, let’s start with some important discrepancies that carry over into different relationships.

When to use the term “removed”

Using the term “removed” indicates a separation of a generation. For example, a first-cousin is the same generation as you are both born to your parents and they to their parents. If you have a first cousin that is once removed that would mean that they are your parents’ first cousin OR your cousin’s first child. This can also be explained with more than one generation gap, hence the terms twice removed or three times removed.

Like removed, great and grand also indicate the separation of generations. They are used both for grandparent/grandchild relationships and for aunt and uncle/niece and nephew relationships.

When looking at grandparents, grandchildren, aunts and uncles, and nieces and nephews, the generation two generations away gets the designation grand. Further generations have great added on.

Two people are half siblings when they share only one parent and not both, for example, a biological father and a stepmother. Other half relationships are used in the sense that they are related to a half sibling. For example, a half-niece would be the daughter of a half-sibling.

Now that is cleared up, here is a list of a few common kinship relationships.

For more, view this helpful chart from familysearch.org 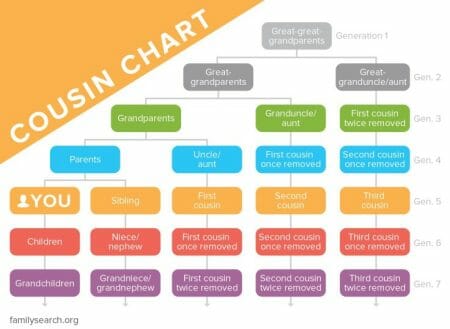 This entry was posted in Family, Relationships