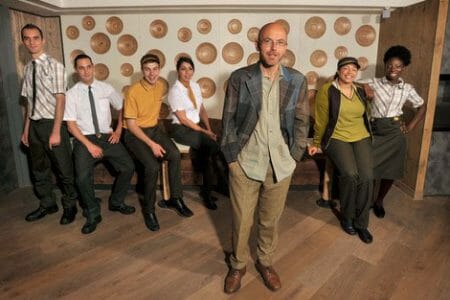 Fast food will never be the same. Wayne Hemingway, of HemingwayDesign and the award-winning street style label Red or Dead, has taken McDonald’s under his wing, giving the fast-food chain an impressive makeover and dressing employees to the ‘McDonald’s nines’.

We’ve taken some of the Americanism out of the uniforms,” Hemingway told Yahoo! Shine. “Baseball caps are a big thing with fast food,” he says, “but they’re far too casual for restaurant service.”

According to Yahoo! Shine, 2000 employes will debut the new looks in four London chains come July. By fall, 87,500 more British employees will be sporting the new uniforms.

So far, the response from employees has been positive, and why wouldn’t it? “At first there was a slight worry about hats because everyone was used to wearing baseball hat but now people seem to like it,” says Hemingway. “With fashion you’re never going to get 100 percent but by far vast majority of what we’re getting are compliments.”

“Humans don’t operate on just one plain when they eat,” explains Hemingway. “What people look at in a restaurant plays a role in how something tastes.”

But it doesn’t look like we’ll be seeing the uniforms in the U.S anytime soon. “It’d be great if they did,” says Hemingway, though he’s not so sure we are ready to leave the baseball cap behind. “Apart from the caps I don’t know why they wouldn’t work in the U.S.” 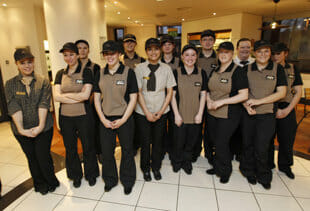 Before Photo of McDonald’s Uniforms

This entry was posted in Fashion, Food & Recipes