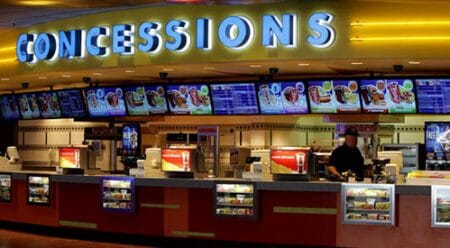 (PCM) Waiting in long lines has always been a bit of an issue when planning to head out to the local movie theater to catch the latest flick, especially if you are running late. Over the years, theaters have made wonderful advancements in cutting down the line at the box office window by allowing customers to pre-purchase their tickets online or on their smart phones, but what about the concession stand?

The days of waiting in long lines for popcorn, candy and sodas could soon be a thing of the past with the recent announcement from Regal Entertainment Group and AMC Theaters. The two theater chains have revealed that they are test marketing a new service that would allow customers to preorder and prepay for food and beverages using a smartphone app. All they have to do when they arrive at the theater is just walk in and pick up their order.

Currently, the concept is being tested at four theaters in Kansas City, Missouri and the companies claim that they want to see a nationwide roll out as soon as possible. Over the years the theaters have seen a steady decline in concession stand sales, however something tells us it is the price not the speed that has led to their issues. Could mobile ordering pick things back up? We will just have to wait and see!

This entry was posted in Food & Recipes, Lifestyle, News