Bride Sells Her Wedding Dress On Ebay To Fund Divorce 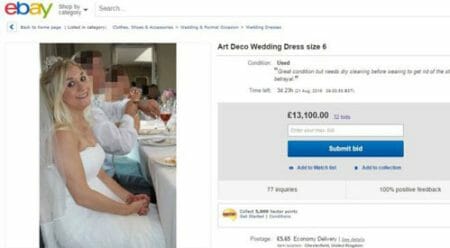 (PCM) A U.K. bride is making headlines as she is selling her wedding dress on Ebay to assist with funding her pending divorce. In her hilarious, yet bitter, posting she claims that her ex-husband has left her to “foot the bill”.

It is the incredibly tongue-in-cheek posting by 28-year old Samantha Wagg that has caused her Ebay list for a size 6 Art Deco wedding gown to go viral. She goes into great detail about her pending divorce from her “cheating scumbag of a husband”.

Wagg is accepting emails from people who have questions about the dress and “the skank that my husband ran off with”, she also hilariously warns buyers that they should be sure to dry clean the dress before wearing to get rid of the “stench of betrayal”.

Wow! Definitely would make us rethink purchasing this one!

Wagg had made an initial posting in regards to the dress however it wasn’t getting any attention. Her brother suggested making it funny in hopes of going viral and the results have been astonishing.

Wagg says her parents paid around $2,600 for the dress back in 2014, however her incredibly comedic bid has raised the price upwards of over $86,000!  Wagg will not reveal any more details about her divorce and claims that she has been approached to appear on several U.K. reality television series, which she is seriously considering.

Wagg says she is humbled by outpouring of love and support from people all over the world and that she has managed to forgive her ex-husband for his mistake and wishes him nothing but the best (without her!) for the rest of his life. She goes on to say “I am very happy now, so I hope he is too.”

This entry was posted in Fashion, Lifestyle, News