Burger Kings’ Black Burger Is Coming To The U.S! 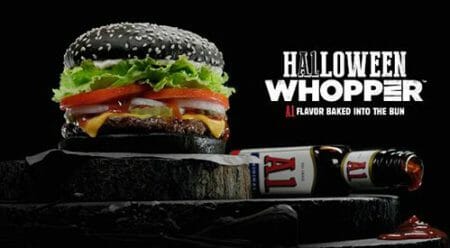 (PCM) Many of us were incredibly jealous when it was revealed that only Burger King restaurants in Japan would enjoy the chance to sample Burger King’s black-colored Kuro burger when it was released last September. It now seems that we will finally get our chance as Burger King has announced that a new version of their black burger is being released here in The States.

Instead of being called the Kuro Burger, it will now be called the “Halloween Whopper”! The new version of the burger will still feature an all black colored bun, however instead of the bun being infused with squid ink, the new Halloween Whopper bun will be infused with A.1. steak sauce.  The A.1 sauce will also be used as a condiment on the burger itself, along with the usual lettuce, tomato and cheese.

While, the Kuro Burger also feature black colored cheese, the Halloween Burger will only feature the normal yellow American cheese. Burger King says that the new Halloween Whopper will cost approximately $4.00 and will only be available for a limited time during the Halloween holiday season.