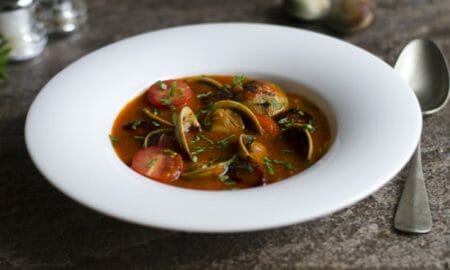 By simplest definition, clam chowder is a thick soup-stew made from clams and other ingredients, most commonly potatoes, onions, and celery. Seafood chowders have been an American staple since colonial times; as clams were plentiful along the coastal regions of the North East, they were a natural addition to this rich and filling “poor man’s food”.

While clam chowders are enjoyed throughout the country, many regions claim their own special variations on the dish. New England clam (a cream-based soup decked out with bacon and oyster crackers) and Manhattan clam (made with thin tomato-based broth) are the most well-known. Hatteras clam chowder from North Carolina boasts a peppery clear broth thickened by flour, while Florida’s Minorcan clam is a tomato-chowder jazzed up with corn and spicy datil chili peppers (similar to a habanero).

You might be interested to know that PCM’s home state of Delaware has its own regional recipe. Similar to New England-style, Delaware clam chowder is milk-based, thickened with butter, and flavored with salt water, potatoes, onions, salt and pepper, quahog clams and pre-fried salt pork (because what’s better than pork? Fried pork). While perhaps not the most heart-healthy meal, that certainly sounds like a delicious way to spend a chilly Atlantic February evening. So chow down! It’s Clam Chowder Day!