Delaware Pizzeria Denies Service To A Family With A Disabled Child 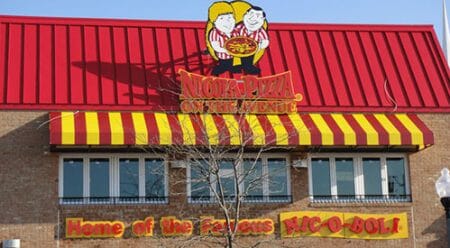 (PCM) Matt Brown and his fiancee Hannah Reese were appalled after they stopped at the famed restaurant Nicola Pizza with their family during their vacation to Rehoboth Beach, DE and were denied service because their 6-month old son suffers from a disability and must remain in his stoller/wheelchair. The couples son was born with a rare genetic disorder called spinal muscular atrophy, which leaves his muscles useless.  Because of this disorder he must lay flat in his specialized stroller so that he can breathe properly and his medical equipment will function correctly.

What makes this even more sad, is that this was the family’s first attempt at sitting down for a family dinner together since their son was diagnosed with the disorder back in May. When they arrived at the restaurant they were informed by a newly hired 17-year old hostess that the restaurant has a strict no strollers policy, so their son would not be able to dine with them unless he was taken out of the stroller and placed in a high chair.

The couple explained to the hostess that their son has a medical condition that requires him to stay in the specialized stroller and that he must remain flat. The hostess then offered to turn a high chair upside down so that they could place a car seat on the legs of the chair, however Brown informed her that his son must stay in the stroller for medical reasons. The hostess still told the couple that strollers were no allowed in the restaurant, no exceptions.

Brown asked if the restaurant was handicap accessible to which the hostess replied “No”.  At that point the family became frustrated and left the establishment feeling incredibly embarrassed by the entire ordeal. Later that evening, Brown put in a phone call to Nicola Pizza co-owner Nick Caggiano, Jr, who apologized for the behavior of the hostess, who he said was newly hired and only thought she was following restaurant policy. He informed Brown that Nicola Pizza is indeed handicap accessible. Brown says that when the explained to Caggiano that his son’s stroller is the equivalent of a wheelchair and that by turning the family away the restaurant violated the ADA (Americans With Disabilities Act), Caggiano laughed and said that the family was barred entry because the Delaware fire code states that strollers can not take up the aisle space the the restaurant, however their son’s medical condition should have been an exception.

News of the incident has been spreading like wildfire across social media after the baby’s grandmother, who is a Rehoboth Beach resident posted the story on her Facebook page. Many are criticizing Nicola Pizza for their behavior, however it may have just been a situation of poor training for new associates who do not understand making exceptions to the rules for certain special circumstances such as this one.

This entry was posted in Debatable, Food & Recipes, I Love Food!, Life, News