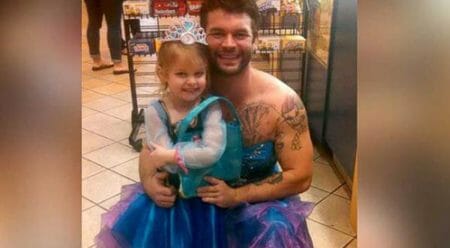 Nagy truly made it an incredible night out for his young niece. He says that the reason he wore the princess costume was due to the fact that his niece, who normally runs all around the house wearing various princess costumes was suddenly embarrassed to wear a princess costume to the movie theater when he made the suggestion.

In order to make her feel better about wearing the costume, Nagy decided that he would wear one as well, that way they could both be princesses. Nagy borrowed an old prom dress from a family friend and the two “princesses” made their way to the theater to enjoy “Cinderella”.

A ticket taker at the theater who was quite taken with Nagy and Isabella’s costumes snapped a photo of the pair and posted it online. Nagy claims that halfway through the film his phone began to go off like crazy as his family and friends began alerting him that the image had gone viral on both Reddit and Facebook.