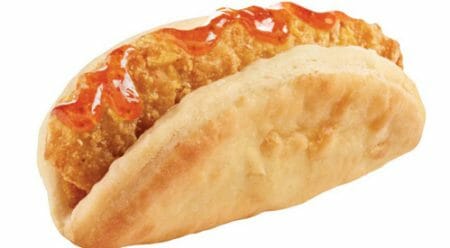 (PCM) Always trying to stay ahead of the competitors in the fast food breakfast war, Taco Bell has made the decision to ditch the Waffle Taco and replace it with the all-new Biscuit Taco.

Taco Bell’s new Biscuit Taco can be stuffed with your choice of sausage, eggs, bacon, cheese and … wait for it … even deep-fried chicken with either jalapeno honey sauce or country gravy. The new Biscuit Taco’s are set to make their official debut at Taco Bell on March 26th.

McDonald’s is still currently holding on to the number one spot in fast food breakfast stops and twenty-five percent of the companies sales come from breakfast items. Taco Bell has been offering up breakfast choices for awhile now, but they only add up to about six percent of the companies overall sale. They are hoping that the roll out of the new Biscuit Taco will help that number rise to at least twenty percent.

They also hope that their choices will offer breakfast customers something different and unique rather than the same old boring breakfast sandwiches. The Biscuit Tacos will be sold for $2.49 when they join other new Taco Bell menu items such as Capn’ Crunch Delights and Fritos Tacos which are set to make their debut soon!

Are you looking forward to giving the new Taco Bell Biscuit Taco a try? I know where we will be on March 26th.