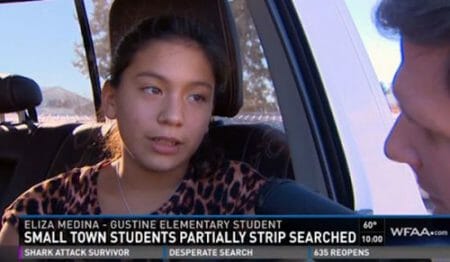 (PCM) The small town of Gustine, Texas is facing a big controversy after it was revealed that students in their elementary school were forced to be subjected to a underwear inspection after feces were found on the school’s gymnasium floor.

The students were basically partially strip searched as the school officials attempted to locate the culprit behind the feces.  Many of the students claimed that they felt very uncomfortable and that their privacy had be violated by the school and the act was simply unacceptable.

Parents in the town are outraged and many plan to attend an upcoming school board meeting to express their anger and hopefully find someone to hold accountable for the incident.

The students claim that that the boys and girls were separated and taken into two different rooms where they were told to pull down their pants so that their underwear could be checked for anything suspicious.

It seems that the the school finding fecal matter on the gym floor has become an ongoing problem, and while parents understand the school’s frustration, forcing the children to a partial strip search is certainly not the answer or correct way to solve the problem.

The Gustine school superintendent claims that he was told that they students were only told to lower their pants a little bit, but the student claim that it was much further.  The superintendent hopes that between the school district and the parents they will be able to come up with a better solution to the problem.

This entry was posted in Debatable, News