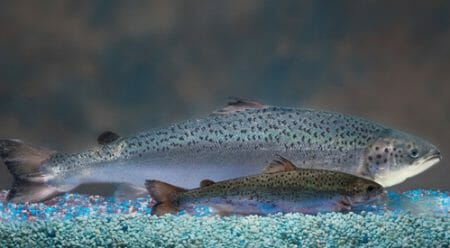 The agency has ruled that the fish is safe to eat despite the number of concerns from consumers about genetically modified food. In a statement the agency revealed “There are no biologically relevant differences in the nutritional profile of AquAdvantage Salmon compared to that of other farm-raised Atlantic salmon.”

The AquAdvantage Salmon are engineered by a Massachusetts-based company called Aquabounty and they claim that their fish grow twice as fast as normal salmon, so they reach the correct market size a lot quicker. The company was able to add a growth hormone found in Pacific Chinook salmon and engineer a way for the fish to produce the hormone all year long, by combining it with a gene from an eel-like fish called an ocean pout.

The company also claims that their fish provide a healthy alternative for consuming salmon without damaging the ocean. The FDA says that they have extensively tested and analyzed the genetically modified salmon and have determined that they are safe for humans to consume.

The part of this that is a little bit unnerving is that since the FDA found no solid differences between normal and engineered salmon they will not require the salmon to be labeled as being engineered when it hits store shelves. Therefore, you may not know that you are actually consuming genetically modified food.

There will be some guidelines put in place by the FDA for any retailers that do wish to label the salmon as being genetically engineered and some have vowed not to sell the salmon at all.