The Holiday Shopping Season Will Soon Be Under Way! List Of Black Friday Store Hours And Which Will Be Open On Thanksgiving Night! 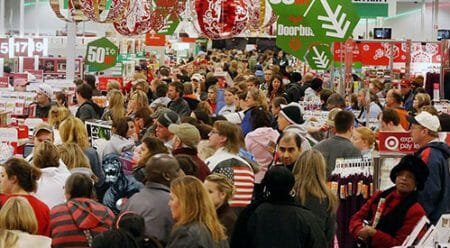 (PCM) The massive holiday shopping season is about to kick-off and consumers are searching high and low to get the best Black Friday deals. Also, this year more than ever, we are seeing the Black Friday shopping frenzy spill over onto the Thanksgiving holiday itself, with many retailers choosing to open their doors on Thursday evening to accommodate anxious shoppers.

There is still quite a bit of controversy surrounding stores making the decision to open up on Thanksgiving night, as many claim that this is taking away from time that should be spent with family and friends rather than battling it out in a store over the lowest priced items. In fact, we were even floored to see some people camping out in front of big box retailers such as Best Buy as early as this past weekend hoping to score the best deals!

The National Retail Federation has predicted that this year’s spending for Black Friday shopping with be $630.5 billion, which is a 3.7% increase from last year. WalletHub analyzed some of the best deals from top retailers and discovered which ones have the best deals depending upon the type of product you wish to buy.

This entry was posted in Coupons & Discounts, Lifestyle, News, Thanksgiving