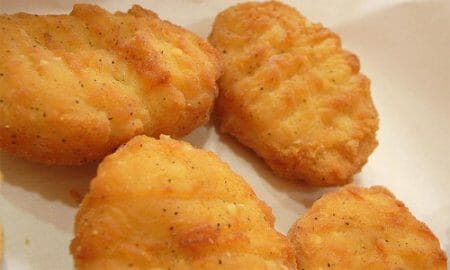 Okay, these gross food facts won’t really make you lose weight, but they will make you lose your appetite! So if you’re easily grossed out, or would rather not know what you’re eating, don’t keep reading. But if you do want to know, for instance, that there could be rodent hairs in your peanut butter and jelly sandwich, then keep reading!

So without further ado, here a few gross food facts!

1. Nuggets are the poultry version of “variety meat.” If you get grossed out by hotdogs, then you really shouldn’t be eating chicken nuggets, either. Hot dogs are known for being made from the less appetizing parts of the cow that you wouldn’t eat otherwise, but chicken nuggets are even worse. According to Yahoo! Shine, nuggets are made from “meat slurry,” a liquefied meat product which is as appetizing as it sounds, and are then molded into the familiar shapes we all know. If mechanically separated chicken wasn’t bad enough, ammonia and artificial flavoring is also added.

2. Rodent Hairs are legally allowed in your food. Believe it or not, the FDA allows four rodent hairs per 100 grams in processed food. Curry powder, allspice, and ground pepper are also allowed to have more rodent hairs. Oh yeah, and some levels of maggots, insect poop, sand, and more are also allowed.

3. Pink Slime. The meat filler has been all over the news, with grocery stores and fast food chains starting to ban ground beef containing pink slime. But unless the ground beef says it doesn’t contain the filler made from meat sludge and ammonia, chances are it’s in there! Stick to organic, free-range beef, instead.

4. Salmon dye may be damaging your eyes. Wild salmon get their pink color from a diet high in krill, but farm raised salmon, without access to krill, is not actually pink. It’s gray. Fisheries use artificial dyes in their feed to give their salmon a pink color. One of these chemicals, Canthaxanthin, has been linked to retinal damage in humans.

5. Your salad dressing may contain the same chemicals as your sunscreen. Food manufacturers add titanium dioxide – normally added to sunscreen and paint – to things like salad dressing, creamers, and icing to make them appear whiter.