First It Was ‘The Dress’, Now The Internet Is Losing It’s Mind Over ‘The Flip-Flops’

(PCM) Just in time for some good old fashioned Thanksgiving family fighting, the internet is once again divided over the color of a pair of flip-flops. Remember “The Dress” debacle? You know, is it black and blue or white and gold? This time everyone is going crazy over whether or not these flip-flops are actually black and blue or gold and white. Notice a trend here?

There appears to be some sort of issue with being able differentiate between these four colors in the spectrum depending on the angle of the photo, where it was taken and the amount of time you spend concentrating on the image. The Huffington Post discovered the origin of the flip-flops debate down to a single tweet from a Twitter user named “arthur.” The rest is viral internet history!

The flip-flops are from footwear brand Havaianas and the company appears to be having fun with the debate by posting an image of the flip-flops on their website, but refusing to directly answer the question in regards to what color the actually are!

So, what do you think? Black/Blue or White/Gold? 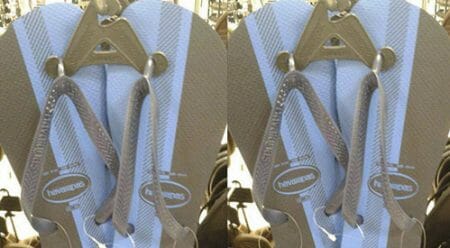