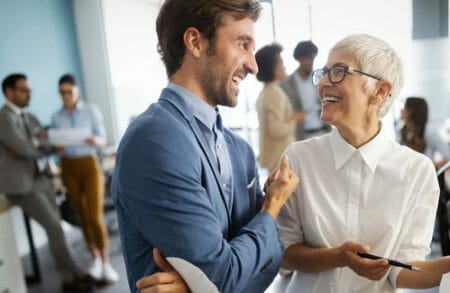 (Or, How to Become a Fear-No-Evil Networking Ninja!)

They say humans fear public speaking more than death. For many the idea of networking isn’t far off. People dread it and avoid it like an overdue dentist appointment that they know will only result in severe discomfort at the very least. Be it as it may, it’s a necessary evil for any career to flourish the rocky waves of job loss or calm seas of advancement. Here are helpful ways to practice, and perhaps even enjoy (I know, I know, but here me out), networking.

Why do so many people hate networking? It’s because they consider it professional and FORMAL. The truth of the matter is that you network every single day. Whether it be small talk with the clerk at the gas station or chit-chatting with other parents at the PTA meeting, networking is really just conversations with strangers and acquaintances.

Think through your typical day… maybe you spoke to your morning barista and both agreed that the redone parking lot layout was working out nicely.

Maybe you were a part of a meeting with new coworkers in another department and had to talk about what your team does for the company.

Perhaps you were introduced to the parent of your child’s new friend at soccer practice where you could tell he was patient when his son, like yours, also came home muddy from the game.

All of these scenarios count because you are opening up your “network” of people in your life.

In addition to the situations listed above, one of the best ways to start off practicing networking is in more casual settings. Make it a game to introduce yourself to at least one new contact a week, or maybe even a day. You can start out small by just saying hello and your name. More often than not a lot of people are afraid to merely be the one to break the ice and introduce themselves. They feel relieved, and even happy, when someone makes the effort. Practice by introducing yourself to neighbors, the gardener, or bus driver. Heck, maybe even the mailman! The point being that the more you make the first move the easier it will be. Get creative. Be social by joining clubs, sports teams, or recreational groups too.

Want to meet more people at work without pressure? Employee Resource Group are a fantastic way to get involved and meet coworkers easily. Not sure what those are or if your company has them? Ask HR and if not, start one yourself!

This might sound silly but why not just sign up for a networking event and watch from afar? There is always a chair in the back of the room. In most cases space is reserved in a restaurant or specific location for that particular group. If joining in makes you nervous go a few times just to see what the crowd is like.

I bet your will see that you have a lot of things in common with the other attendees.

Do yourself a favor and avoid coming across as an amateur by looking like you’ve done this before. Come dressed professionally with lots of business cards. Bonus points if you come with a nice custom name tag to avoid wearing the lame “Hello my name is” stick-ons like a sucker. Have your intro pitch practiced because you will definitely be asked, “What do you do?” Know what you are looking for by asking other attendees if they can introduce you to anyone in your field. Many times the event organizers will feel extra important if they can make connections for you.

Most importantly, remember that networking events are meant to just start you off to grow the relationship later. Don’t come on too strong with asking for favors such as, “Can you pass my resume along to so-and-so”, but instead “Can you tell me what you like and don’t like about your company?”

Feel yourself panicking because you don’t know who to talk to? Go up to someone standing alone or a group of three so that you could branch off separately with one of them if you need to.

These are well-known tips but reminders are always helpful.

Get going and find networking groups that you are interested in

Not sure where or with who you should be networking with to advance your career? Start by asking your boss, coworkers, and other friends or colleagues in your line or work or industry what groups they might be members of. They tend to fall in a few categories including function, industry, level, age, gender and geographical area. For example:

Some groups may even be a combo of the two (level and industry). Check out Meetup.com or eventbrite to see what could be coming up near you.

Remember to connect with contacts on LinkedIn since it can reintroduce you, and keep you in touch with, people with whom you’ve just met in-person.

Networking is like dating. It’s nerve-wracking and can feel awkward but the more you put yourself out there the higher chance of a positive outcome in your favor. Don’t let opportunities pass you by for fear that can be overcome with a little practice.