Do Women Have To Choose Between Academics AND Their Love Life? 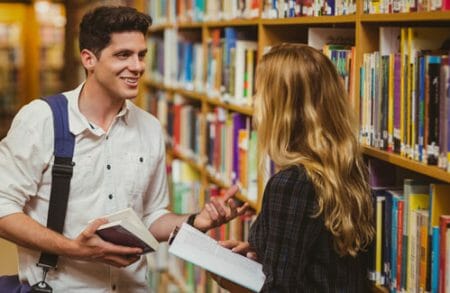 I have a distinct memory from my Econ 101 professor at Penn State telling me and the rest of the wide-eyed, freshman-class, “These four years are the highest probability in your life that you will be surrounded by others your age with similar proximity, interests, and lifestyles. In other words, the best chance you have at finding your life partner is here.” With that thought everyone looked around and gave a friendly smile to the pretty girl or guy next to them just in case they might be “the one”.

College is the one place to meet a ton of people that would make a potential husband or wife.

So why didn’t I take that advice more seriously? I wish I knew. I guess because I was eighteen and thought I had all of the time in the world.

Cut to almost a decade since I graduated from college and I am still Single-Sally, you know, totally available and not even in a committed relationship. Marriage is so far away on the timeline I can hear Buzz Lightyear describe it as “to infinity and beyond!”

One reason why is because dating as an adult is VERY hard and emotionally tolling post college.

All of these things were so much simpler while living at college.

There you could just tell the guy you shared a chat with in the food commons to invite him to the party you heard about later that night.

You had the chance to make googly eyes at the hottie in the Anthropology section of the library and ask him to join your Wednesday afternoon study group.

Or even pretend to knock on the wrong dorm room door looking for your friend when really you wanted to hit on your way-to-mature-for-you-and-probably-not-interested RA (Resident Assistant), like my friend Molly did.

You could blow off your 1:30 p.m. class to go for a romantic walk down Main Street if you wanted to.

There were no limits or restrictions, living like a single co-ed.

Now you are an adult working 9-5, running errands, and other mandatory grown-up things You have to adult. The rest of your life gets in the way.

Not to mention that the pool of eligible men isn’t very deep.

They say most of the good men are taken and who’s single you can’t take seriously because they are about still 20 years away from mental and lifestyle maturity. They still live at home, don’t have a real career path or direction, and can’t make a rational decision for example, do they pay the cable bill or go out with the boys?

Nonetheless, it’s important to keep trying if you are in a position like me. However, if you are still in college, I STRONGLY encourage you to put more effort into dating than I did. Say something! Smile at that guy! Focus on school first, but don’t forget to give the nice guy who shared an umbrella with you in the rain the time of day. The future of your love-life depends on it.

This entry was posted in Advice, Lifestyle, Relationships