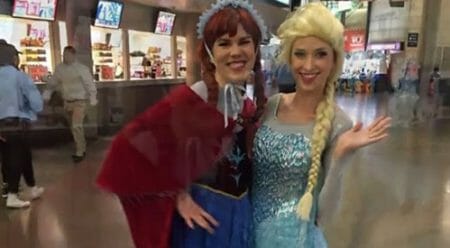 (PCM) Two Utah women were asked to leave a performance of Disney’s Frozen On Ice after they were accused of distracting audiences members from the show that was taking place on the ice.  Kandra Pearson and Andrea Bedke claim that they spent hundreds of dollars on tickets to the performance and were shocked when they were asked to exit the arena.

Pearson and Bedke came to the show dressed in full Elsa and Anna costumes and while one would assume that they were asked to leave because of heckling or some sort of obnoxious behavior, they were actually asked to leave because they look too darn good in their costumes. A spokesperson for the Salt Lake Arena where the show was taking place released the following statement:

“Their costumes and characters were so real that they disrupted the live performance due to the volume of other patrons seeking to take photographs. Multiple requests were made by the ‘Disney on Ice’ production for them to stop posing for pictures during the show. At intermission, guest services staff asked them to leave the arena to prevent further disturbances…. It was unfortunate that they became too popular among the fans.”

The women were of course outraged about their removal from the show and as an apology the arena issued them a full refund and tickets to an upcoming Utah Jazz game. Does that seem like a fair trade?  We think it would be hilarious if they showed up to the Utah Jazz game dressed in the Frozen costumes!