Hair Colorist Is Inspired By Famous Paintings And The Results Are Gorgeous! 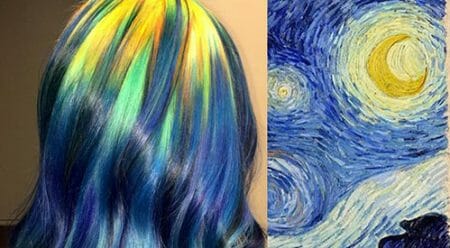 (PCM) Kansas-based hair stylist Ursula Goff is pulling inspiration from several world-famous paintings to create some absolutely magnificent works of art when it comes to hair coloring. Obviously, bright and non-traditional coloring techniques are all the rage these days, however turning hair into a canvas for fine art is definitely a bit out of the ordinary and Goff’s results are stunning.

Goff has been sharing her coloring works via Instagram and the feedback has been incredible. She has tackled hair coloring recreations of everything from “The Scream” by Edvad Munch to Monet’s “Waterlilies”.  In her captions that accompany the photos she shares a little bit of backstory about the artist and why she chose to use them as an inspiration. Cool stuff!

I often get asked where I went to hair school, and what sort of cosmetology education background I have. The answer is probably disappointing for most people – I went to a community college Cosmo program and have almost no other training outside of that. However, I have done art since I was 5, first developing hand skills as a sketcher, and then expanding those skills into color by working with acrylics, tempera, and especially water colors. I tend to color hair much the same way I color a canvas, using the same sorts of color application techniques and identical color theory. So in honor of my art background being so useful, I thought I’d do a Fine Art series, similar in concept to the Starry Night/hair presentation I recently did. Today, I’m sharing the work of Norwegian artist Edvard Munch. His work tends to fall under the Symbolism category, and this is his most well known painting, “The Scream”, which has a bit of an unusual color palette, which I think contributes to the emotional discord of the image. I tend to very strongly agree with Munch’s art philosophy: “I do not believe in the art which is not the compulsive result of Man’s urge to open his heart.” Many things I make simply because they are pretty, but my favorite pieces force themselves out of me in surges of emotional energy. Without art, I think I’d be far more dysfunctional, as I would struggle to express myself in other ways. @asset35 #painting #symbolism #edvardmunch #thescream #rainbowhair #mermaidhair #unicornhair #orangehair #bluehair #joico #specialeffects #pravana #behindthechair

Fine Art Series: This is one of many water lilies paintings that Claude Monet painted. Monet is the most famous of the Impressionist artists, who sought to focus on light and movement, often at the expense of form. Initially not well received, the term “Impressionism” was borrowed from a derogatory review by an art critic. However, it ultimately created the inertia that moved art into the modern period, freeing up a multitude of future artists to use freer and looser styles. Monet himself, however, struggled to internalize the influence of his work, battling depression and feelings of failure his entire life, destroying as many as 500 hundred of his own paintings, and even attempting suicide at one point. This goes to illustrate that no matter our feelings about ourselves, we can still have an enormous ongoing influence in the world; perhaps in that sense, there is no such thing as failure. #art #painting #Impressionism #Monet #impressionists #bluehair #greenhair #minthair #behindthechair #modernsalon