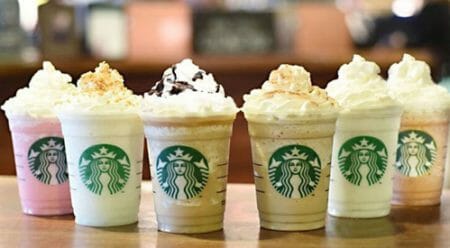 (PCM) It has been 20 years since Starbucks first introduced their delicious Frappuccino blended beverages and to celebrate Starbucks has introduced six brand new flavors, voted on by fans, which will all be available beginning now for a limited time only.

The new flavors are: Caramel Cocoa Cluster, Cinnamon Roll, Cotton Candy, Cupcake, Lemon Bar and Red Velvet Cake. According to Starbucks the new flavors were decided on by the various Frappuccino flavor combinations created by customers over the last 20 years. The flavors chosen were the most popular.

Each beverage is made with milk and ice and of course topped with a delightful dollop of whipped cream. Below you can find a complete list of the ingredients/flavor combinations that make up each special Frappuccino.

I definitely see multiple trips to Starbucks in our near future!