JetBlue Boots Family Off Of Flight Over A Birthday Cake 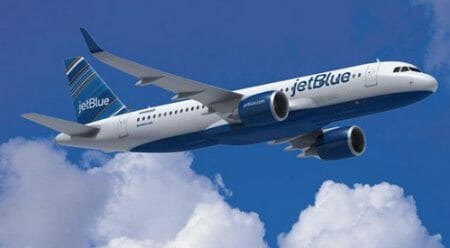 (PCM) We don’t know what in the world is going on with the airlines these days, but now JetBlue is coming under fire for allegedly kicking a family off of a flight from New York to Las Vegas over an argument about a birthday cake.

Cameron Burke, his wife Minta, and their two kids Cameron Jr. (7) and Camille (9) were on a flight from New York to Las Vegas on their way to celebrate Minta’s 40th birthday. They were carrying with them a birthday cake from Tonnie’s Minis, a famous bakery in Harlem, NY.

Burke claims he was then asked to move the cake to the seat in front of him and this is where the situation began to take a turn for the worst. He says that he was approached by a different flight attendant who began accusing him of being non-compliant. He claimed her behavior was “irrational” and he and his family were there asked by yet another flight attendant to leave the plane. Burke refused and began filming the incident with his cellphone.

Port Authority officers were then called to the plane and after an investigation found that Burke and his family were doing nothing wrong, however JetBlue representatives had everyone that was already on board the plane exit the aircraft as a way to get the Burke family off the plane as well. The family’s tickets and reward points were then refunded and they were asked to leave the JetBlue boarding area.

As for JetBlue, they have a completely different story. They claim that Burke stored the cake in a compartment that was used specifically for in-flight emergency equipment and refused to move the cake despite being asked several times. The airline goes on to claim that the family became more and more angry about the situation and began yelling a crew members and tossing out accusations. They say that the family refused to speak to a customer service leader for JetBlue and that is why Port Authority was called in and it was ultimately the captains call to have the family booted from the flight.

All other passengers were eventually allowed to re-board the aircraft for their flight to Vegas. Burke claims he was able to get a flight to Vegas the next day through a different airline, but does intend to file a lawsuit against JetBlue.

You can see video of the Burke family’s side of the incident below: