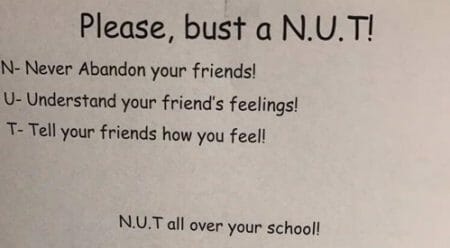 (PCM) Someone may have wanted to rethink the oddly sexual slogan that was printed on several posters that were posted at a middle school near Houston, Texas. The posters urged students to “Please, bust a N.U.T”, and while the message was well-meaning, urging students to “N-Never Abandon Your Friends!, U-Understand your friends feelings!, and T-Tell your friends how you feel!”, the posters till took on an oddly sexual context.

We want to say that the posters were unintentional, however something about the way they were worded make us suspicious that the creator was hoping that they would go viral and they certainly have after an image of one of the flyers was shared by the sister of a student who attends the school.

My sisters middle school put these flyers all around & i honestly have no words pic.twitter.com/mDmj5Yhzyj

While the posters give sage advice to students, it is the way in which they were presented that leads to many questions. Did the person who created them really have no idea what “Bust a N.U.T” really refers to or was it someone who was just trying to be funny?

No word yet on who posted the flyers, and something tells us they have been taken down by now, but let’s hope that no one got in too much trouble over this bizarre incident.

This entry was posted in Advice, Debatable, Lifestyle, News